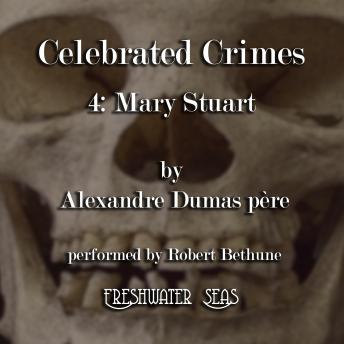 Download or Stream instantly more than 55,000 audiobooks.
Listen to "Celebrated Crimes 4: Mary Stuart" on your iOS and Android device.

In this, the fourth of the series, Dumas tells the story of Mary Stuary, Queen of Scots--a story both strikingly touching and almost morbidly violent. Never one to allow a mere fact to stand in the way of a good story, though very sympathetic to Mary, Dumas puts all the most sensational accusations made against her--mostly by her enemies--to circumspect yet full use, which certainly distorts history, but makes for a great tale. Also, he often takes the novelist's approach, giving us details of scenes for which there can be no historical record--we are given, for example, a wonderful description of Darnley's actions and feelings at Kirk of Field as his enemies prepared to blow the house sky-high with him in it, despite the fact that Darnley was alone at the time and died in the explosion. As the translator notes, "The careful, mature reader, for whom the books are intended, will recognize, and allow for" Dumas' love of sensationalism. We're reading Dumas here, not Tuchman or Toynbee.

Dumas gives us a sweeping tale of love, hatred, betrayal, connivance, conquest both military and sexual, and above all the fragility of royalty--a form of greatness that can disappear like a bubble. It is a tale of events and personalities that shook Europe and created both a potent historical influence and an unfailing fountain of romance.