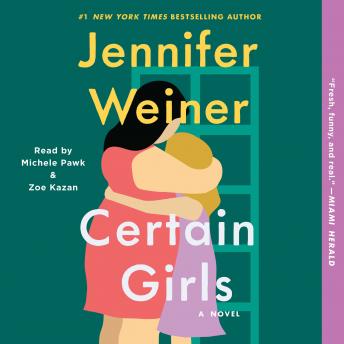 Download or Stream instantly more than 55,000 audiobooks.
Listen to "Certain Girls" on your iOS and Android device.

'My mother,' Joy Shapiro Krushelevansky writes in her diary late one night, 'is the most embarrassing person to have ever been born.' It's been almost thirteen years since we've last seen Cannie Shapiro, the heroine of Good in Bed, whose journey toward happily-ever-after, and peace with her fractured family and plus-size body, made millions of women the world over laugh, cry, and see themselves on the page.

The last decade of Cannie's life has brought some surprises. Her life story, in fictional form, became an unexpected best-seller, and Cannie has since choosen to retreat from fame's fallout, writing science fiction under a pen name. Her daughter, Joy, has descended into the throes of moody adolescence, just in time for her bat mitzvah. Her best friend, Samantha, is looking for love in all the wrong places (specifically, an online dating site called AJew4U.com). Her husband, Peter, has decided that he'd like to have a baby, and the family's first choice for a surrogate is none other than Cannie's flamboyant kid sister. Just when things can't get any worse -- or weirder -- Cannie's long-lost (and largely unlamented) father shows up at her doorstep, and Joy swipes her mother's credit card and heads West in pursuit of the grandfather she's only seen once.

Funny and tender, with memorable characters and Weiner's trademark whip-smart dialogue and sharp observations about modern life, Certain Girls is a story about family (biological and chosen), love, loss, and the enduring bonds between mothers and daughters, husbands and wives.