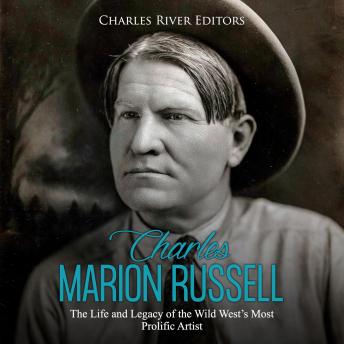 Charles Marion Russell: The Life and Legacy of the Wild West’s Most Prolific Artist

Download or Stream instantly more than 55,000 audiobooks.
Listen to "Charles Marion Russell: The Life and Legacy of the Wild West’s Most Prolific Artist" on your iOS and Android device.

Many of the first artists in the West were assigned to exploration and geological parties, working as archivists and obedient to demands of cold accuracy. However, a few were driven by an imaginative mix of real events and fantastical visions to whet the appetite of Eastern consumers and preserve their own nostalgia on canvas. Among the most prominent artists depicting the “old” West was Charles Marion Russell, a prolific painter, sculptor, writer, and storyteller based in the heart of the Montana country. Through his years of capturing scenes of daily life between cowboys and Indians before a backdrop of exquisite Montana scenery, he was known by the names of C.M. Russell, Charlie Russell, and “Kid” Russell. As an artist greatly esteemed among art devotees and virtually all Westerners who knew him, he acquired monikers such as the “Rembrandt of the Range” and the “Cowboy Artist.” Entirely self-trained, Russell left over 4,000 works that include paintings and bronze sculptures of cowboys, Indians, and the landscapes of the West, as well as Alberta, Canada. As an advocate and activist for the Native Americans, he supported the improvement of reservation conditions and spoke out for the Chippewa’s bid for the right to live in Montana. This right was validated by Congress in the early 20th century with the creation of the Rocky Boy Reservation.

Russell sketched and painted throughout his life, defying the constrictions of a daily work regimen, but he aspired to work primarily as a cowboy for many years with the understandable assumption that his art would never provide a sustainable living. A fortuitous marriage launched Russell into international art circles, and it brought him a level of wealth never anticipated by the would-be cattle wrangler.