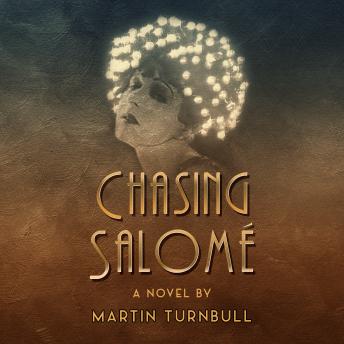 Download or Stream instantly more than 55,000 audiobooks.
Listen to "Chasing Salome: A Novel of 1920s Hollywood" on your iOS and Android device.

Alla Nazimova has reached the pinnacle of success. She is the highest-paid actress in town, with a luxurious estate, the respect of her peers, adoration of her fans, and a series of lovers that has included the first wife of her protégé, Rudolph Valentino.

But reaching the top is one thing. Staying there is an entirely different matter.

Nazimova dreams of producing a motion picture of Oscar Wilde’s infamous “Salomé.” It will be a new form of moviemaking: the world’s first art film.

But the same executives at Metro Pictures who hailed Nazimova as a genius when she was churning out hit after hit now turn their backs because her last few movies have flopped.

Taking matters into her own hands, Nazimova decides to shoot “Salomé” herself. But it means risking everything she has: her reputation, her fortune, her beautiful home, and even her lavender marriage. But will it be enough to turn her fortunes around? Or will Hollywood cut her out of the picture?

From the author of the Hollywood’s Garden of Allah novels and based on a true story, “Chasing Salomé” takes us inside Nazimova’s struggle to achieve a new level of stardom by raising the flickers to an art form.