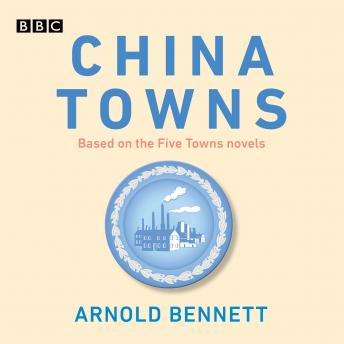 Download or Stream instantly more than 55,000 audiobooks.
Listen to "China Towns: Based on the Five Towns Novels: BBC Radio 4 full-cast dramatisations" on your iOS and Android device.

Neil Dudgeon and Tim McInnerny star in this epic tale of money, passion and defiance, inspired by the 'Five Towns' novels of Arnold Bennett

In this radical reinterpretation of Arnold Bennett's classic novels set in the Staffordshire potteries, it's the 19th Century and the Industrial Revolution is at full throttle. Only the ruthless thrive in this uncompromising world - and Ephraim Tellwright and Darius Clayhanger are both determined to succeed.

From humble beginnings, these two self-made men have risen to become wealthy and powerful. Now, they hold the fate of the Five Towns in their hands, passing judgement on those who put the prosperity and reputation of their community at risk...

Over 10 hours and almost 40 years, we follow them, their descendants, and the inhabitants of Bursley and the Five Towns, as individuals rise, fall, flourish, age, and see the world around them become unrecognisable, transformed by new technology. Fortunes are lost, hearts broken, empires built and compromises made.

These tales of aspiration and passion, damage and danger are told with Bennett's forensic eye for human psychology and a surprising degree of witty comedy, and feature a star cast including Emma Cunniffe, Kate O'Flynn, Don Gilet and Rebekah Staton.