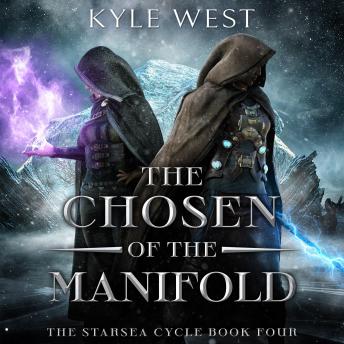 The Chosen of the Manifold

Download or Stream instantly more than 55,000 audiobooks.
Listen to "The Chosen of the Manifold" on your iOS and Android device.

Lucian may have bested the cunning Sorceress-Queen of Psyche, but his journey of survival is just beginning...

When he learns the location of The Prophecy of the Seven, he has no choice but to embrace his destiny as the Chosen of the Manifold and find it. Only the prophecy can lead him to the rest of the Seven Aspects of Magic. But the prophecy is in the last place he wants to go: the Golden Palace of Dara, the seat of the powerful Sorceress-Queen.

His newfound powers and abilities will be tested as never before, as he lays everything on the line to challenge her again. He must fight capable new enemies, survive Psyche's brutal deserts, and decide whether he is up to the task of handling the Orbs.

Lucian must grow not only in power but in wisdom. Humanity teeters on the brink of destruction. One false move, and it's all over...