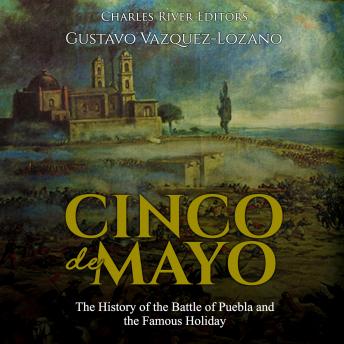 Cinco de Mayo: The History of the Battle of Puebla and the Famous Holiday

Download or Stream instantly more than 55,000 audiobooks.
Listen to "Cinco de Mayo: The History of the Battle of Puebla and the Famous Holiday" on your iOS and Android device.

"We are so superior to the Mexicans in race, in organization, in discipline, in morality and in elevation of feeling, that I beg your Excellency to be so good as to inform the emperor that I am already master of Mexico." - French General Charles de Lorencez before the Battle of Puebla
There are two great misconceptions about Cinco de Mayo in the United States, despite the fact it has become one of the country's most beloved days. The first misconception is that the date marks the Independence of Mexico, and the second is that the celebration was imported in relatively recent times by Mexican immigrants. In fact, May 5 does not mark Mexico's independence (which is celebrated on September 16), but the day of the most important battle in the history of the country, fought against the French. Furthermore, the celebration of Cinco de Mayo did not originate in Mexico but in America in the 1860s, shortly after the Battle of Puebla. Indeed, Mexico was still occupied by the French at the time, and Cinco de Mayo is actually as American as apple pie.
The Battle of Puebla took place 100 miles east of Mexico City in May 1862, pitting a poorly-fed, ill-equipped and inexperienced Mexican army, largely formed by peasants who were simply given a rifle or a saber, against one of Europe's greatest powers. Nonetheless, the results would demonstrate not only Mexico's integrity but also the crumbling of colonial European power in the Americas. The triumph of a modest Mexican general who was born in Texas was a surprise not only for Mexicans, but even more so for French Emperor Napoleon III and his army, considered to be 'the first soldiers of the world.' It also resonated in the European press that expected to see a re-conquest of Mexico without great difficulties. Things would forever be different in the Americas.
150 years later, Cinco de Mayo is firmly established as a party day for millions of people, most notably in America. The streets fill with dances, colorful parades, mariachi music, and lots of Mexican food, as Americans consume 81 million pounds of avocados, millions of bags of tortilla chips, and $735 million worth of beer, not to mention the countless margaritas made with 127 million liters of tequila, a drink that everyone properly associates with Mexico. The celebration is not limited to the Hispanic community, either, as people of all origins commemorate the day to recognize Mexico's contribution to North American history or to have fun and drink more tequila than ever. Even America's federal government has joined the festivities; since the 1980s, the White House has celebrated Cinco de Mayo with mariachi music and Mexican dances, making clear the connection between the Mexican victory and America's own Civil War.
Cinco de Mayo: The History of the Battle of Puebla and the Famous Mexican Holiday looks at the important battle, its ramifications, and the celebration of the event. Along with pictures of important people, places, and events, you will learn about Cinco de Mayo like never before.