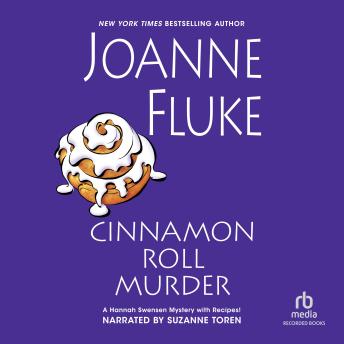 Download or Stream instantly more than 55,000 audiobooks.
Listen to "Cinnamon Roll Murder" on your iOS and Android device.

April is a busy time for Hannah Swensen and her bakery; the warm weather makes folks in Lake Eden, Minnesota go wild for something sweet. When Hannah hears that the Cinnamon Roll Six jazz band will be playing at the town's Weekend Jazz Festival, she's more than happy to bake up a generous supply of their namesake confections to welcome the band to town. Before the festival even begins, tragedy strikes when the tour bus overturns. Among those injured is Buddy Neiman, the band's beloved keyboard player. Buddy's injuries appear minor, until his condition suddenly takes a turn for the worse - as in dead. Hannah's no doctor, but she suspects that the surgical scissors someone plunged into Buddy's chest may have something to do with it. Hannah isn't sure just how she'll unravel the mystery, but one thing's for sure: nothing's sweeter than bringing a killer to justice.