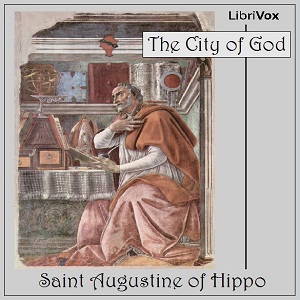 The City of God

Download or Stream instantly more than 55,000 audiobooks.
Listen to "The City of God" on your iOS and Android device.

Rome having been stormed and sacked by the Goths under Alaric their king, the worshippers of false gods, or pagans, as we commonly call them, made an attempt to attribute this calamity to the Christian religion, and began to blaspheme the true God with even more than their wonted bitterness and acerbity. It was this which kindled my zeal for the house of God, and prompted me to undertake the defence of the city of God against the charges and misrepresentations of its assailants. This work was in my hands for several years, owing to the interruptions occasioned by many other affairs which had a prior claim on my attention, and which I could not defer.

However, this great undertaking was at last completed in twenty-two books. Of these, the first five refute those who fancy that the polytheistic worship is necessary in order to secure worldly prosperity, and that all these overwhelming calamities have befallen us in consequence of its prohibition. In the following five books I address myself to those who admit that such calamities have at all times attended, and will at all times attend, the human race, and that they constantly recur in forms more or less disastrous, varying only in the scenes, occasions, and persons on whom they light, but, while admitting this, maintain that the worship of the gods is advantageous for the life to come. In these ten books, then, I refute these two opinions, which are as groundless as they are antagonistic to the Christian religion.

But that no one might have occasion to say, that though I had refuted the tenets of other men, I had omitted to establish my own, I devote to this object the second part of this work, which comprises twelve books, although I have not scrupled, as occasion offered, either to advance my own opinions in the first ten books, or to demolish the arguments of my opponents in the last twelve. Of these twelve books, the first four contain an account of the origin of these two cities—the city of God, and the city of the world. The second four treat of their history or progress; the third and last four, of their deserved destinies. And so, though all these twenty-two books refer to both cities, yet I have named them after the better city, and called them The City of God. (Summary by the author in his Retractationes (ii. 43) as translated by Marcus Dods)