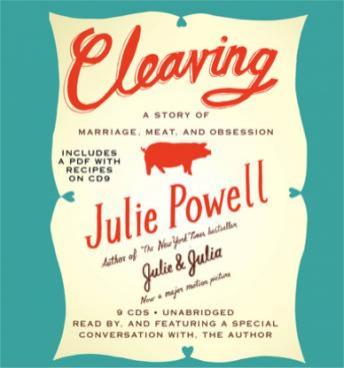 Cleaving: A Story of Marriage, Meat, and Obsession

Download or Stream instantly more than 55,000 audiobooks.
Listen to "Cleaving: A Story of Marriage, Meat, and Obsession" on your iOS and Android device.

Julie Powell thought cooking her way through Julia Child's Mastering the Art of French Cooking was the craziest thing she'd ever do -- until she embarked on the voyage recounted in her memoir, Cleaving.

Her marriage challenged by an insane, irresistible love affair, Julie decides to leave town and immerse herself in a new obsession: butchery. She finds her way to Fleischer's, a butcher shop where she buries herself in the details of food. She learns how to break down a side of beef and French a rack of ribs -- tough physical work that only sometimes distracts her from thoughts of afternoon trysts.

The camaraderie at Fleischer's leads Julie to search out fellow butchers around the world -- from South America to Europe to Africa. At the end of her odyssey, she has learned a new art and perhaps even mastered her unruly heart.