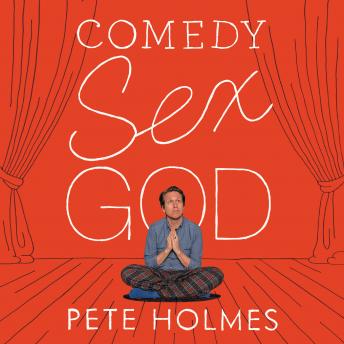 Download or Stream instantly more than 55,000 audiobooks.
Listen to "Comedy Sex God" on your iOS and Android device.

Part autobiography, part philosophical inquiry, part sacred quest—The Subtle Art of Not Giving A F*ck for the spiritual seeker—a hilarious, profound, and enlightening romp around the fertile mind of stand-out stand-up comedian, host of the hugely successful podcast You Made it Weird, and star of HBO’s Crashing, Pete Holmes

Growing up as evangelical Christian outside Boston, Pete Holmes was taught that drugs, alcohol, and pre-marital sex were serious transgressions. Faithful to the tenets of his faith, Pete did not swear, did not drink, did not smoke, and did not fornicate. He did devote himself to one woman, married her, and moved to the country to start a simple life and build a family. Then the wife he pledged himself to cheated on him very publicly. Thanks for nothing, God.

When his attempt at a picture-perfect life failed, Pete was forced to re-examine his beliefs. But neither atheism, Christianity, nor copious bottles of Yellow Tail led to enlightenment. Longing for a model of faith that served him and his newfound uncertainties about the universe—you know, the little things—the scorned believer embarked on a soul-seeking journey that has become the foundation of his work today. Comedy Sex God is his funny, thoughtful, straight-from-the-heart mediation on life, creativity, love, God, and the things that matter to him—and to us all.

Pete ponders the most valuable spiritual truths he’s picked up in his post-religion life and shares a few personal stories—of professional success, failure, and the pain in his balls. Comedy Sex God is celebration of losing something to find something else—a void that became a door to spiritual exploration—a glorious journey into the mind-blowing unknown that never would have begun if your wife hadn’t cheated with a guy named Rocco.