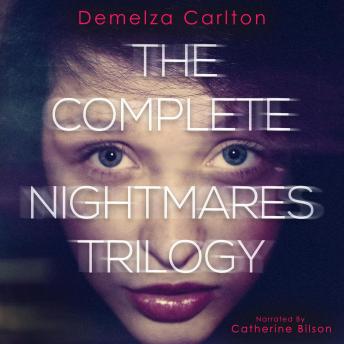 Download or Stream instantly more than 55,000 audiobooks.
Listen to "The Complete Nightmares Trilogy" on your iOS and Android device.

25+ hours filled with more twists and turns than a high-speed car chase.

You'll get all 3 books in the Nightmares Trilogy:

Late at night, Nathan trudges down the beach where his sister's body was found. He's searching for answers, but all he finds is a new nightmare: another girl's tortured body.

The unlikely hero becomes the prime suspect. Saving Caitlin's life was just the start. Nathan must win her trust and unlock the memories hidden in her nightmares to find out who's really responsible, before it's too late.

From the moment she wakes up in hospital, Caitlin desires only one thing: vengeance.

But her ordeal has taken its toll - it's a long road to recovery, and she can't turn vigilante on her own. Forced to team up with Nathan, the broken man who saved her life, Caitlin doesn't know who to trust. Especially when Nathan has secrets of his own that could kill them both.

Five years ago, Nathan's world came crashing down. The witness protection program stole the woman he loved and now he's lost everything.. His security job is a daily reminder of the girl he failed to protect, dragging him deeper into despair.

Forced to assume the identity of a dead girl, Caitlin struggles to rise from the ruins of the life she lost. A career change summons her home, but Perth isn't the safe haven it seems. Someone is hunting her - one of her kidnappers, a long-lost relative or another terrorist with an axe to grind?

When nightmares from their past threaten to engulf Nathan and Caitlin, can a broken hero and a girl living another woman's afterlife finally fight their way free?