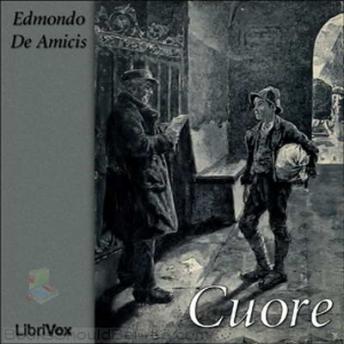 Download or Stream instantly more than 55,000 audiobooks.
Listen to "Cuore" on your iOS and Android device.

ENGLISH:
Heart (Italian: Cuore) was a children’s novel written by Italian author Edmondo De Amicis. It is set during the Italian unification, and includes several patriotic themes. It was issued by Treves on October 17, 1886, the first day of school in Italy, and rose to immediate success.

The novel is written in a diary form as told by Enrico Bottini, a 10-year old primary school student in Italy with an upper class background who is surrounded by classmates of working class origin. The entire chronological setting corresponds to the third-grade season.

Enrico’s parents and older siblings sometimes correspond with Enrico through the means of his diary: his teacher assigns him with homework dealing with stories of children throughout the Italian states, who should serve as role models – the stories are then given in full as Enrico is supposed to have written them. Most topics revolve around moral values, and the predilect ones include helping those in need, love for family and friends, and patriotism.