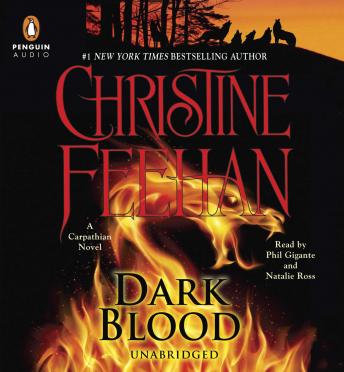 Download or Stream instantly more than 55,000 audiobooks.
Listen to "Dark Blood" on your iOS and Android device.

The fates of a warrior reborn and a seductive Dragonseeker are irrevocably entwined in the new Carpathian novel by #1 New York Times bestselling author Christine Feehan, “the queen of paranormal romance” (J. R. Ward).

Zev Hunter was an elite warrior, a dark-blood dealer of death to rogue Lycans who preyed on mankind. He was a loner, never given to personal attachments, and damned fierce at his job. But Zev begins to question his past and his purpose when he awakens in the darkness of the sacred cave of warriors—and is soothed back to consciousness by the sensuously familiar voice of one woman, the woman who has haunted his fantasies for centuries. She was Branislava, member of the Dragonseeker clan.

Mother Earth called the ancients to witness your rebirth. . . .

For this half-mage, half-Carpathian temptress, the ritual of awakening Zev to the council of warriors was the only way to save him. Locked away for his own protection, the time has now come for his rebirth, for his blood to stir with that of the ancient warriors before him. He has been assured by Branislava that their fates are entwined, that their spirits are woven together for eternity and that his new purpose in life is beyond imagining.

Now, with a blood-sworn vow of honor, mercy, and endurance, and under the influence of a siren as bewitching as Branislava, Zev begins to wonder what his purpose is, what it means for the future of the Carpathians, and what it is about his rebirth that he has to fear.