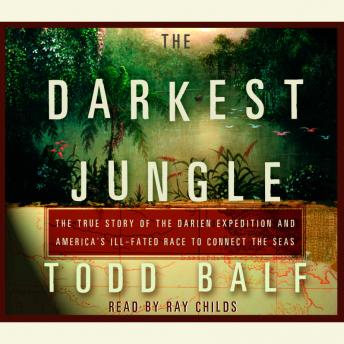 The Darkest Jungle: The True Story of the Darien Expedition and America's Ill-Fated Race to Connect the Seas

Download or Stream instantly more than 55,000 audiobooks.
Listen to "The Darkest Jungle: The True Story of the Darien Expedition and America's Ill-Fated Race to Connect the Seas" on your iOS and Android device.

“Commit yourself to the Virgin Mary, for in her hands is the way into the Darién—and in God’s is the way out.”

The Darkest Jungle tells the harrowing story of America’s first ship canal exploration across a narrow piece of land in Central America called the Darién, a place that loomed large in the minds of the world’s most courageous adventurers in the nineteenth century. With rival warships and explorers from England and France days behind, the 27-member U.S. Darién Exploring Expedition landed on the Atlantic shore at Caledonia Bay in eastern Panama to begin their mad dash up the coast-hugging mountains of the Darién wilderness. The whole world watched as this party attempted to be the first to traverse the 40-mile isthmus, the narrowest spot between the Atlantic and Pacific in all the Americas.

Later, government investigators would say they were doomed before they started. Amid the speculative fever for an Atlantic and Pacific ship canal, the terrain to be crossed had been grossly misrepresented and fictitiously mapped. By January 27, 1854, the Americans had served out their last provisions and were severely footsore but believed the river they had arrived at was an artery to the Pacific, their destination. Leading them was the charismatic commander Isaac Strain, an adventuring 33-year-old U.S. Navy lieutenant. The party could have turned back except, said Strain, they were to a man “revolted at the idea” of failing at a task they seemed destined to accomplish. Like the first men to try to scale Everest or reach the North Pole, they felt the eyes of their countrymen upon them.

Yet Strain’s party would wander lost in the jungle for another sixty nightmarish days, following a tortuously contorted and uncharted tropical river. Their guns rusted in the damp heat, expected settlements never materialized, and the lush terrain provided little to no sustenance. As the unending march dragged on, the party was beset by flesh-embedding parasites and a range of infectious tropical diseases they had no antidote for (or understanding of). In the desperate final days, in the throes of starvation, the survivors flirted with cannibalism and the sickest men had to be left behind so, as the journal keeper painfully recorded, the rest might have a chance to live.

The U.S. Darién Exploring Expedition’s 97-day ordeal of starvation, exhaustion, and madness—a tragedy turned “triumph of the soul” due to the courage and self-sacrifice of their leader and the seamen who devotedly followed him—is one of the great untold tales of human survival and exploration. Based on the vividly detailed log entries of Strain and his junior officers, other period sources, and Balf’s own treks in the Darién Gap, this is a rich and utterly compelling historical narrative that will thrill readers who enjoyed In the Heart of the Sea, Isaac’s Storm, and other sagas of adventure at the limits of human endurance.