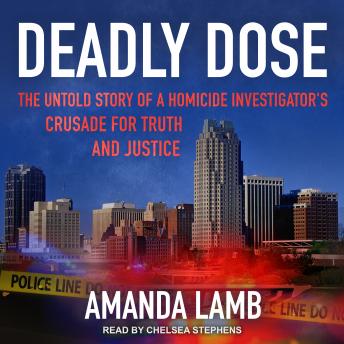 Deadly Dose: The Untold Story of a Homicide Investigator's Crusade for Truth and Justice

Download or Stream instantly more than 55,000 audiobooks.
Listen to "Deadly Dose: The Untold Story of a Homicide Investigator's Crusade for Truth and Justice" on your iOS and Android device.

The crime was unforgivable.

One man's pursuit of justice-unstoppable.

The death of promising young pediatric AIDS researcher Eric Miller stunned the Raleigh, North Carolina, community, largely because of the horrific way he was killed. For months, Eric was slowly tortured as arsenic consumed his body.

No one thought that Eric Miller's wife, Ann-an attractive, demure, educated scientist-could be capable of such a horrible crime. No one except for veteran homicide investigator Chris Morgan, a man in the twilight of his career. But from the moment Morgan saw the thirty-year-old widow in the interview room at the police department, he knew he was seeing pure evil.