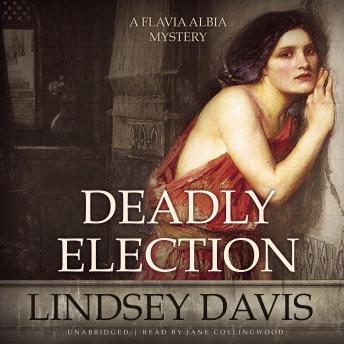 Download or Stream instantly more than 55,000 audiobooks.
Listen to "Deadly Election" on your iOS and Android device.

In the first century AD, during Domitian’s reign, Flavia Albia is ready for a short break from her family. So, in July, she returns to Rome, leaving them at their place on the coast. Albia, daughter of Marcus Didius Falco, who is now retired as private informer, has taken up her father’s former profession, and it’s time to get back to work. The first order of business, however, is the corpse found in a chest sent as part of a large lot to be sold by the Falco family auction house. As the senior family representative in Rome, it falls upon Albia to find out who, why, and by whom.

At the same time, her potential suitor, Faustus, comes looking for help with his friend Sextus’ political campaign. Between the auction business and Roman politics, it’s not quite clear which is more underhanded. Both, however, are tied together by the mysterious body in the chest, and if Albia isn’t able to solve that mystery, it won’t be the only body to drop.

“In ancient Rome, elections can be murder…Flavia’s third case benefits from the heroine’s combination of archness and vulnerability and the author’s deep knowledge of the period.”—Kirkus Reviews