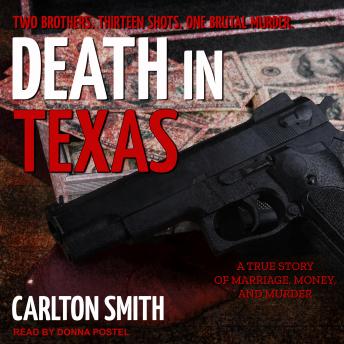 Death in Texas: A True Story of Marriage, Money, and Murder

Download or Stream instantly more than 55,000 audiobooks.
Listen to "Death in Texas: A True Story of Marriage, Money, and Murder" on your iOS and Android device.

Was he his brother's keeper?

Robert and Doris Angleton seemed to have the perfect life. Until she was coldly murdered in her own home, shot thirteen times in the head, chest, and abdomen . . .

Suddenly the ideal husband seemed anything but perfect: he was jailed, accused of hiring his older brother, Roger, to kill his wife for money-possibly as much as $2 million. However, without the crucial eyewitness testimony of Roger-who soon committed suicide in a Houston jail cell- the case against Robert rested entirely on circumstantial evidence. But the facts raise more questions than answers . . .

Doris Angleton-deeply involved in a secret love affair-had asked her husband for a divorce, which might have exposed him as a tax-skipping millionaire bookie and favored police informant . . .

Extensive handwritten and typewritten notes, coupled with a secretly taped conversation between Roger and another man outlining the murder, were found in a briefcase Roger Angleton was carrying when he was arrested in Las Vegas, Nevada. However, it was later concluded that the second voice on the tape was not Robert's . . .

Ultimately Roger confessed to the murder in his suicide note, exonerating his brother of any guilt . . .

A Texas jury came to one conclusion.

Listen to this fascinating true-crime account of greed, deception, and cold-blooded murder-and decide for yourself.