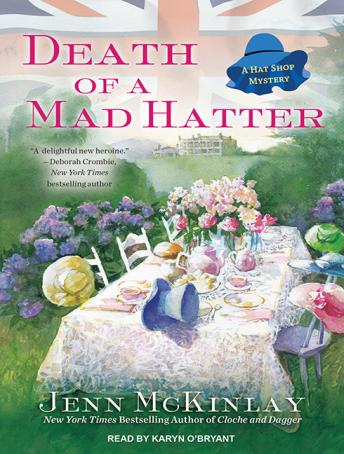 Death of a Mad Hatter

Download or Stream instantly more than 55,000 audiobooks.
Listen to "Death of a Mad Hatter" on your iOS and Android device.

Scarlett Parker and her British cousin, Vivian Tremont, are hard at work at Mim's Whims-their ladies' hat shop on London's chic Portobello Road-to create hats for an Alice in Wonderland-themed afternoon tea, a fund-raiser for a local children's hospital. It seems like a wonderfully whimsical way to pass the hat, and Scarlett and Viv are delighted to outfit the Grisby family, the hosts who are hoping to raise enough money to name a new hospital wing after their patriarch.

Unfortunately, the Grisby heir will not live to see it-he's been poisoned. When traces of the poison are found on the hat that Scarlett and Viv made for him, the police become curiouser and curiouser about their involvement. Now the ladies need to don their thinking caps and find the tea party crasher who's mad enough to kill at the drop of a hat.