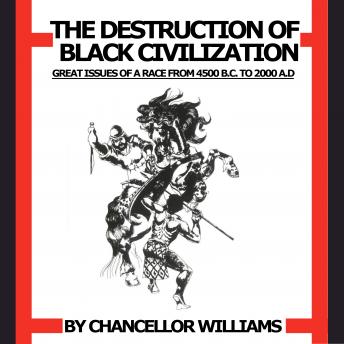 Download or Stream instantly more than 55,000 audiobooks.
Listen to "Destruction of Black Civilization: Great Issues of a Race from 4500 B.C. to 2000 A.D." on your iOS and Android device.

The Destruction of Black Civilization took Chancellor Williams 16 years of research and field study to compile. The book, which was to serve as a reinterpretation of the history of the African race, was intended to be 'a general rebellion against the subtle message from even the most 'liberal' white authors (and their Negro disciples): 'You belong to a race of nobodies. You have no worthwhile history to point to with pride.'' The book was written at a time when many black students, educators, and scholars were starting to piece together the connection between the way their history was taught and the way they were perceived by others and by themselves. They began to question assumptions made about their history and took it upon themselves to create a new body of historical research. The book is premised on the question: If the Blacks were among the very first builders of civilization and their land the birthplace of civilization, what has happened to them that has left them since then, at the bottom of world society, precisely what happened? The Caucasian answer is simple and well known: The Blacks have always been at the bottom.'
Williams instead contends that many elements - nature, imperialism, and stolen legacies - have aided in the destruction of the black civilization. The Destruction of Black Civilization is revelatory and revolutionary because it offers a new approach to the research, teaching, and study of African history by shifting the main focus from the history of Arabs and Europeans in Africa to the Africans themselves, offering instead 'a history of blacks that is a history of blacks. Because only from history can we learn what our strengths were and, especially, in what particular aspect we are weak and vulnerable. Our history can then become at once the foundation and guiding light for united efforts in serious[ly] planning what we should be about now.'