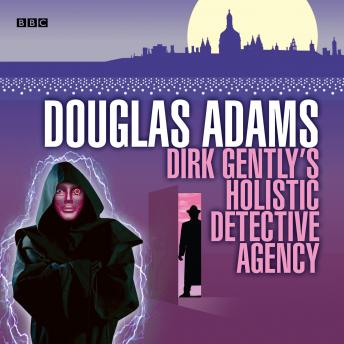 Download or Stream instantly more than 55,000 audiobooks.
Listen to "Dirk Gently's Holistic Detective Agency" on your iOS and Android device.

Dirk Gently has an unshakeable belief in the interconnectedness of all things, but his Holistic Detective Agency mainly succeeds in tracking down missing cats for old ladies. Then Dirk stumbles upon an old friend behaving bizarrely - and is drawn into a four-billion year old mystery that must be solved if the human race is to avoid immediate extinction. Harry Enfield stars as Douglas Adams's much-loved psychic sleuth, with Billy Boyd, Andrew Sachs, Jim Carter and Olivia Colman ('Peepshow'). Considered by many Adams fans to be as funny - if darker - than The Hitchhiker's Guide To The Galaxy, this adventure features everything from quantum physics to missing cats, via Coleridge, Bach and an Electric Monk. This is the first of two series adapted from the 'Dirk Gently' books, directed by Dirk Maggs, who was chosen by Douglas Adams to conclude the award-winning The Hitchhiker's Guide To The Galaxy, and this release contains nearly one hour of additional unbroadcast material.