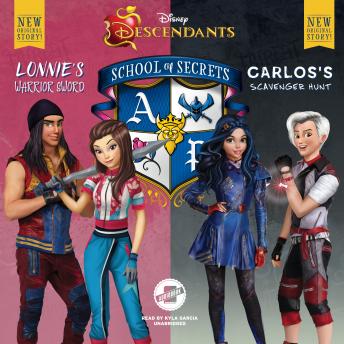 Enjoy these all-new tales of mystery, magic, and adventure from the world of Descendants 2!

Lonnie is the daughter of Mulan. She's strong. She's fearless. And she's willing to fight for what she wants. When Lonnie takes her friends on an forbidden trip to the Imperial City to get the sword that belonged to her mother, she must prove she's a true warrior.

Carlos is the son of Cruella de Vil. He's thoughtful. He's sweet. He's kind. But when Carlos joins up with Evie and Jane for the Auradon Prep Scavenger Hunt, he decides it's his chance to prove that he's more than Mr. Nice Guy-that he'll do whatever it takes to lead his team to victory ... even if it means using his newly discovered magic to win the coveted prize.