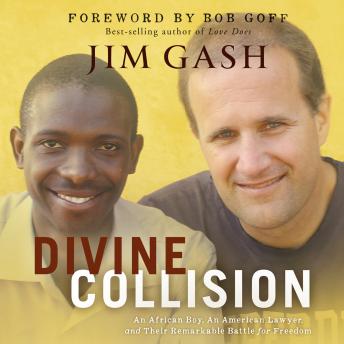 Divine Collision: An African Boy, An American Lawyer, and Their Remarkable Battle for Freedom

Download or Stream instantly more than 55,000 audiobooks.
Listen to "Divine Collision: An African Boy, An American Lawyer, and Their Remarkable Battle for Freedom" on your iOS and Android device.

"The story is as emotional as it is thrilling, and it reads like a major film." — PUBLISHERS WEEKLY

Jim Gash’s comfortable life as a Los Angeles lawyer and law professor nearly ensured that he and Henry, a Ugandan boy languishing in prison for two murders he didn’t commit, would never meet. Henry was losing hope and prayed for a sign from God. Halfway around the world, Jim listened to best-selling author of Love Does, Bob Goff, encourage lawyers to use their legal training to help imprisoned children in Africa. Jim felt an irresistible urge to respond to this call. Little did Henry know, his prayer had been answered.
Divine Collision tells the first hand, true story of how Jim and Henry, separated not only by an ocean and thousands of miles, but also differing cultures and life experiences, inspired justice reform for an entire country. Divine Collision is a fast-paced thriller and will keep you listening, wanting to know what happens next for Henry and Jim.