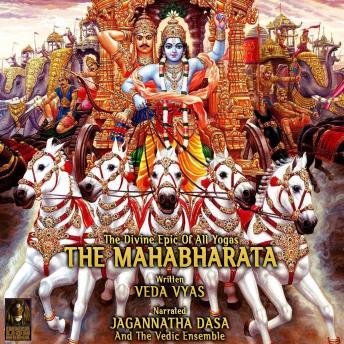 The Divine Epic Of All Yogas The Mahabharata

Download or Stream instantly more than 55,000 audiobooks.
Listen to "The Divine Epic Of All Yogas The Mahabharata" on your iOS and Android device.

Jagannatha Dasa And The Vedic Ensemble

Krishna Dvaipāyana, also known as and Veda Vyāsa 'the one who classified the Vedas'), is a rishi (sage). He is best known as the author of the Mahabharata, one of the two most important epics of Hinduism. He is also credited as the traditional compiler of the Vedas, as well as the writer of other important works including the Puranas.

As per the Mahabharata, Vyasa is the son of rishi Parashara and a fisherwoman named Kali (Satyavati), who later marries king Shantanu of Kuru. Throughout the epic, Vyasa appears occasionally helping the Kuru kingdom. His spiritual career includes compiling many texts and spreading the knowledge through his disciples.

The festival of Guru Purnima is dedicated to him. It is also known as Vyasa Purnima, the day believed to be both of his birth and when he divided the Vedas. Vyasa is considered one of the seven Chiranjivis (long-lived, or immortals), who are still in existence according to Hindu tradition.

Jagannatha Dasa is the author of over thirty internationally bestselling biographies, including the London Sunday Times bestseller 'Blackbird: The Life and Times of Paul McCartney' and 'Dark Horse: The Private Life of George Harrison'. He can be heard on the Westwood One Radio Network and has written and produced over seven hundred original spoken-word albums and video documentaries on various aspects of popular culture. He is also a well-known movie actor. Jagannatha Dasa has been collecting and trading in elite rock memorabilia since 1968. Two coffee table books of his extensive world class collection have been published by Penguin Books.