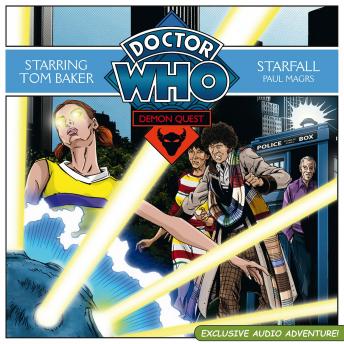 Download or Stream instantly more than 55,000 audiobooks.
Listen to "Doctor Who Demon Quest 4: Starfall" on your iOS and Android device.

Two things arrive on the same night in Central Park, New York, 1976. The first is a fireball from space, bringing with it a new identity for one Alice Trefusis. The second is the TARDIS, carrying the Doctor and his friends on the trail of an unusual comic book cover. The Doctor's strength is sapped by something in the New York air - but what could cause such a malaise? As he and Mike are first mixed up with the police and then taken on an aerial ride over the city, Mrs Wibbsey comes face to face with the legendary Talkies film star Mimsy Loyne. And all the while, long multicoloured scarves and floppy felt hats are climbing the stairs of the Dakota Building... With Tom Baker as the Doctor, Susan Jameson as Mrs Wibbsey, Richard Franklin as Mike Yates, Trevor White as Buddy, Laurel Lefkow as Alice, Lorelei King as Mimsy Loyne, Rupert Holliday Evans as the Cop, and John Chancer as the Cultist, Starfall is the fourth of five linked stories written by the acclaimed Paul Magrs.