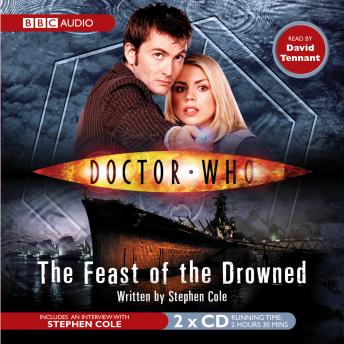 Doctor Who: The Feast Of The Drowned

Download or Stream instantly more than 55,000 audiobooks.
Listen to "Doctor Who: The Feast Of The Drowned" on your iOS and Android device.

When a naval cruiser sinks in mysterious circumstances in the North Sea, all aboard are lost. Rose is saddened to learn that the brother of her friend, Keisha, was among the dead. But then he appears to them as a ghostly apparition, begging to be saved from the coming feast... the feast of the drowned. As the dead crew haunt loved ones all over London, the Doctor and Rose are drawn into a chilling mystery. What sank the ship, and why? When the cruiser’s wreckage was towed up the Thames, what sinister force came with it? The river’s dark waters are hiding an even darker secret, as preparations for the feast near their conclusion... Read by the Tenth Doctor himself, this exciting adventure features the Doctor and Rose, as played by David Tennant and Billie Piper in the acclaimed hit series from BBC Television. Also included is an exclusive bonus interview with the author, Stephen Cole, compiled by David Darlington of Doctor Who Magazine.