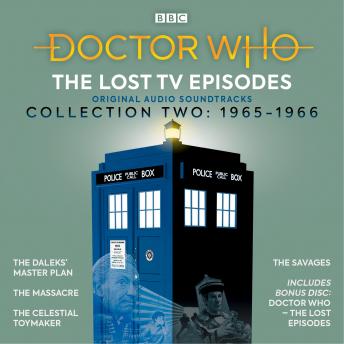 Four more thrilling soundtrack adventures from the early days of Doctor Who, featuring serials lost from the TV archive.

The pictures may be lost, but each of these stories survives as a soundtrack recording. Remastered, and with additional linking narration, they can be enjoyed once more.

In The Daleks' Master Plan, the Daleks have stolen the Time Destructor, and are threatening to destroy the fabric of Time itself. Pursued across Time and Space, the TARDIS crew are in grave danger.

In The Massacre, the TARDIS materialises in Paris, 1572, a time of danger and religious strife. When Steven witnesses an execution, he believes the Doctor has been executed in front of his eyes.

In The Celestial Toymaker, the travellers arrive in the domain of the Toymaker, where failure to win a series of games could result in them becoming playthings for eternity.

In The Savages, the TARDIS arrives on a distant and seemingly idyllic world, but the Doctor, Steven and Dodo discovers that it hides a terrible secret.

Special linking narration is provided by Peter Purves, who also recalls his time making the original episodes in a bonus interview. Also included is an edition of BBC Radio's Archive on 4 from 2009.

In 'Doctor Who -- The Lost Episodes' Shaun Ley investigates what happened to the missing episodes of Doctor Who from the 1960s.