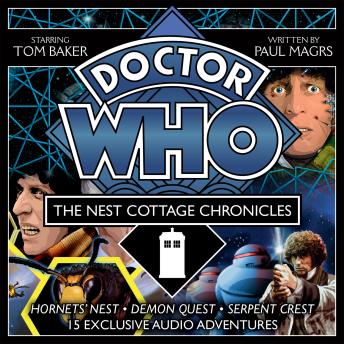 Download or Stream instantly more than 55,000 audiobooks.
Listen to "Doctor Who: The Nest Cottage Chronicles: 4th Doctor Audio Originals" on your iOS and Android device.

Tom Baker stars as the Fourth Doctor in fifteen full-cast audio dramas written by Paul Magrs, plus bonus features exclusive to this edition.

Hornets’ Nest: When former UNIT captain Mike Yates is reunited with a ghost from the past, he and the Doctor are soon united in battle once more, against alien insects intent on global domination.

Demon Quest: A key component from the TARDIS disappears, exchanged for a bag containing four curious objects. Each one is a clue, and so the Doctor and Mrs Wibbsey embark on a chase through Time…

Serpent Crest: The Doctor acquires a Skishtari egg, whose powers are both wondrous and deadly. When the village of Hexford comes under attack, Mrs Wibbsey and Mike discover that two Doctors aren’t necessarily better than one…

Also included in this edition are a previously unheard interview with Tom Baker, outtakes from the original studio sessions, promotional trailers and a PDF booklet featuring sleeve notes by writer Paul Magrs.