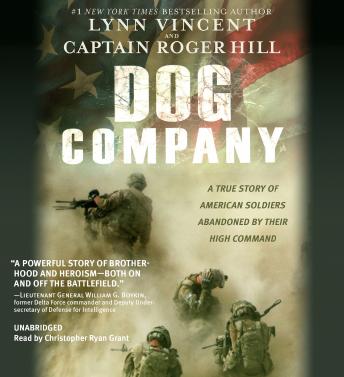 Dog Company: A True Story of American Soldiers Abandoned by Their High Command

Download or Stream instantly more than 55,000 audiobooks.
Listen to "Dog Company: A True Story of American Soldiers Abandoned by Their High Command" on your iOS and Android device.

Now with a forward by Sean Hannity, this powerful story of brotherhood, bravery, and patriotism exposes the true stories behind some of the Army's darkest secrets.
The Army does not want you to read this book. It does not want to advertise its detention system that coddles enemy fighters while putting American soldiers at risk. It does not want to reveal the new lawyered-up Pentagon war ethic that prosecutes U.S. soldiers and Marines while setting free spies who kill Americans.
This very system ambushed Captain Roger Hill and his men.
Hill, a West Point grad and decorated combat veteran, was a rising young officer who had always followed the letter of the military law. In 2007, Hill got his dream job: infantry commander in the storied 101st Airborne. His new unit, Dog Company, 1-506th, had just returned stateside from the hell of Ramadi. The men were brilliant in combat but unpolished at home, where paperwork and inspections filled their days.
With tough love, Hill and his First Sergeant, an old-school former drill instructor named Tommy Scott, turned the company into the top performers in the battalion.
Hill and Scott then led Dog Company into combat in Afghanistan, where a third of their men became battlefield casualties after just six months. Meanwhile, Hill found himself at war with his own battalion commander, a charismatic but difficult man who threatened to relieve Hill at every turn. After two of his men died on a routine patrol, Hill and a counterintelligence team busted a dozen enemy infiltrators on their base in the violent province of Wardak. Abandoned by his high command, Hill suddenly faced an excruciating choice: follow Army rules the way he always had, or damn the rules to his own destruction and protect the men he'd grown to love.