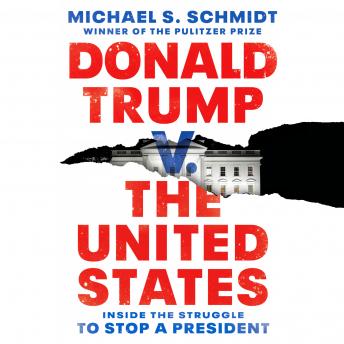 Donald Trump v. the United States: Inside the Struggle to Stop a President

Download or Stream instantly more than 55,000 audiobooks.
Listen to "Donald Trump v. the United States: Inside the Struggle to Stop a President" on your iOS and Android device.

NEW YORK TIMES BESTSELLER • With unparalleled reporting, a Pulitzer Prize–winning New York Times reporter continues to break news about the most important political story of our lives as he chronicles the clash between a president and the officials of his own government who tried to stop him.

In the early days of the Trump presidency, the people who work in the institutions that make America America saw Trump up close in the Oval Office and became convinced that they had to stand up to an unbound president. These officials faced a situation without parallel in American history: What do you do, and who do you call, if you are the only one standing between the president, his extraordinary powers, and the abyss?

Michael S. Schmidt’s Donald Trump v. The United States tells the dramatic, high-stakes story of those who felt compelled to confront and try to contain the most powerful man in the world as he shredded norms and sought to expand his power.

Schmidt has broken many of the major stories of the Trump era, from the news of Hillary Clinton’s use of a personal email account to the report on former FBI director James Comey’s contemporaneous memos of conversations with Trump that led directly to the appointment of special counsel Robert S. Mueller III. Now he takes us inside the defining events of the presidency, chronicles them up close, and records the clash between an increasingly emboldened president and those around him, who find themselves trying to thwart the president they had pledged to serve, unsure whether he is acting in the interest of the country, his ego, his family business, or Russia. Through their eyes and ears, we observe an epic struggle.

Drawing on secret FBI and White House documents and confidential sources inside federal law enforcement and the West Wing, Donald Trump v. The United States is vital journalism, recording the shocking reality of a presidency like no other, a riveting contemporary history, and a lasting account of just how fragile and vulnerable the institutions of American democracy really are.