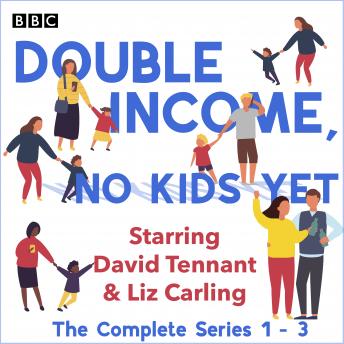 Double Income, No Kids Yet: The Complete Series 1-3

Download or Stream instantly more than 55,000 audiobooks.
Listen to "Double Income, No Kids Yet: The Complete Series 1-3" on your iOS and Android device.

David Tennant and Liz Carling star in the sitcom about a young couple, Daniel and Lucy, and their circle of friends.

In the first series, Lucy sets up Daniel's party, but their mates seem too busy with kids. Then, when a top author gets writer's block, Lucy and Daniel get landed with an unwelcome guest. In the third episode, Daniel and Lucy's plans for a quiet weekend are hit by a stream of unplanned visitors and are later hit by other people's baby blues. Is poker really the answer? Lucy's up for promotion, but Katie can't decide on naming her baby. And in the last episode, when they're asked to be godparents, Lucy's thrilled. The same can't be said for Dan, however.

In the second series Lucy drags Dan to the gym after yet another night on the tiles and Dan's best mate Andy is surprised to meet Lucy's old school chum.

Dan and Lucy's getaway plans are thwarted by other people's problems, Steve and Linda host a dinner party, and with news of another baby for their best friends, Dan takes action over Lucy's reaction.

In the third series, Katy's a mum at last, Daniel's got a new job, but Lucy's jealous. Daniel and Lucy rethink their priorities on a golfing break with their awful friends. And change is all around, but Lucy doesn't realise that Daniel can't keep secrets.

Pregnant Lucy must also break the news to her parents, Daniel gets a taste of fatherhood, and have Daniel and Lucy finally had enough of dealing with other people's problems?