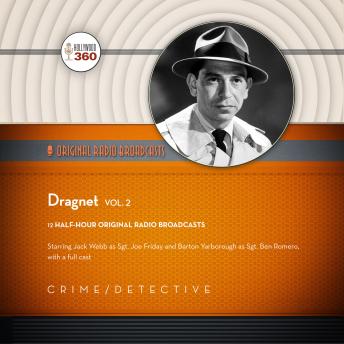 Download or Stream instantly more than 55,000 audiobooks.
Listen to "Dragnet, Vol. 2" on your iOS and Android device.

Set in Los Angeles, and starring Jack Webb as the stoic SergeantJoe Friday, Dragnet is perhaps themost famous and influential police procedural drama of all time, having made extensiveruns on both radio and television. Webb, also the producer of the show, took theseries to new highs, insisting on realism in every facet of the program. Thedialogue was clipped and sparse, taking its cue from hard-boiled crime fiction àla Raymond Chandler and Dashiell Hammett. The stories were fast-paced but thorough,making sure to chronicle every step of the police work from start to finish. Asa result, Dragnet draws listenersdeeply in to its world of gritty crime and dedicated cops, guaranteeing an exhilaratingaudio experience.
Episodes included are: "The Big Friend," "The Big Threat," "The Big Saint," "The Big Mailman," "The Big Imposter," "The Big Building," "The Big Run," "The Big Cliff," "The Big Love," "The Big Set-Up," "The Big Seventeen," and "The Big Waiter."