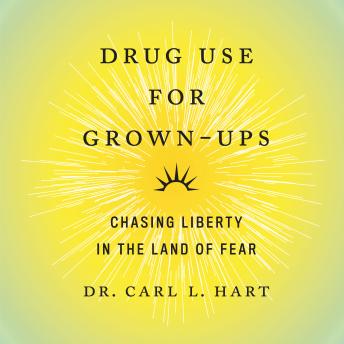 Drug Use for Grown-Ups: Chasing Liberty in the Land of Fear

Download or Stream instantly more than 55,000 audiobooks.
Listen to "Drug Use for Grown-Ups: Chasing Liberty in the Land of Fear" on your iOS and Android device.

From one of the world's foremost experts on the subject, a powerful argument that the greatest damage from drugs flows from their being illegal, and a hopeful reckoning with the possibility of their use as part of a responsible and happy life

Dr. Carl L. Hart, Ziff Professor at Columbia University and former chair of the Department of Psychology, is one of the world's preeminent experts on the effects of so-called recreational drugs on the human mind and body. Dr. Hart is open about the fact that he uses drugs himself, in a happy balance with the rest of his full and productive life as a colleague, husband, father, and friend. In Drug Use for Grown-Ups, he draws on decades of research and his own personal experience to argue definitively that the criminalization and demonization of drug use--not drugs themselves--have been a tremendous scourge on America, not least in reinforcing this country's enduring structural racism.

Dr. Hart did not always have this view. He came of age in one of Miami's most troubled neighborhoods at a time when many ills were being laid at the door of crack cocaine. His initial work as a researcher was aimed at proving that drug use caused bad outcomes. But one problem kept cropping up: the evidence from his research did not support his hypothesis. From inside the massively well-funded research arm of the American war on drugs, he saw how the facts did not support the ideology. The truth was dismissed and distorted in order to keep fear and outrage stoked, the funds rolling in, and black and brown bodies behind bars.

Drug Use for Grown-Ups will be controversial, to be sure: the propaganda war, Dr. Hart argues, has been tremendously effective. Imagine if the only subject of any discussion about driving automobiles was fatal car crashes. Drug Use for Grown-Ups offers a radically different vision: when used responsibly, drugs can enrich and enhance our lives. We have a long way to go, but the vital conversation this book will generate is an extraordinarily important step.

*This audiobook includes a PDF of figures and an appendix from the book.