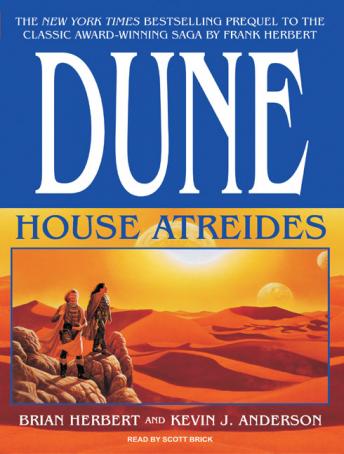 Download or Stream instantly more than 55,000 audiobooks.
Listen to "Dune: House Atreides: Prelude to Dune Book 1" on your iOS and Android device.

Frank Herbert's award-winning Dune chronicles captured the imagination of millions of readers worldwide. By the time of his death in 1986, Herbert had completed six novels in the series, but much of his vision remained unwritten. Now, working from his father's recently discovered files, Brian Herbert and bestselling novelist Kevin J. Anderson collaborate on a new novel, the prelude to Dune-where we step onto the planet Arrakis decades before Dune's hero, Paul Muad'Dib Atreides, walks its sands.

Here is the rich and complex world that Frank Herbert created, in the time leading up to the momentous events of Dune. As Emperor Elrood's son plots a subtle regicide, young Leto Atreides leaves for a year's education on the mechanized world of Ix; a planetologist named Pardot Kynes seeks the secrets of Arrakis; and the eight-year-old slave Duncan Idaho is hunted by his cruel masters in a terrifying game from which he vows escape and vengeance. But none can envision the fate in store for them: one that will make them renegades-and shapers of history.