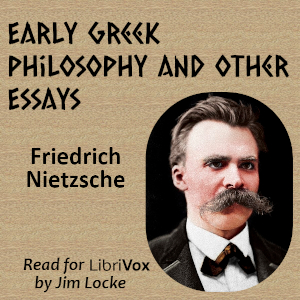 Early Greek Philosophy and Other Essays

Download or Stream instantly more than 55,000 audiobooks.
Listen to "Early Greek Philosophy and Other Essays" on your iOS and Android device.

The essays contained in this volume treat of various subjects. With the exception of perhaps one we must consider all these papers as fragments. Written during the early Seventies, and intended mostly as prefaces, they are extremely interesting, since traces of Nietzsche's later tenets Ñ like Slave and Master morality, the Superman Ñ can be found everywhere. But they are also very valuable on account of the young philosopher's daring and able handling of difficult and abstruse subjects. "Truth and Falsity," and "The Greek Woman" are probably the two essays which will prove most attractive to the average reader. (Translated by Maximilian August Mugge)