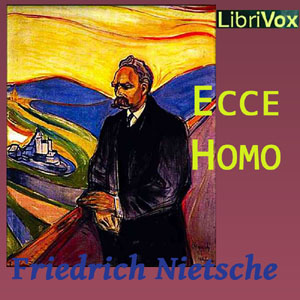 Download or Stream instantly more than 55,000 audiobooks.
Listen to "Ecce Homo" on your iOS and Android device.

The philosopher Friedrich Nietzsche's autobiography, Ecce Homo, was the last prose work that he wrote before his illness in 1889. Coming at the end of an extraordinarily productive year in which he had produced The Twilight of the Idols and The Antichrist, Nietzsche shuns any pretense at modesty with chapter titles include “Why I am so Wise”, “Why I am so Clever” and “Why I Write Such Excellent Books”. His translator Anthony M. Ludovici states, Ecce Homo “is not only a coping-stone worthy of the wonderful creations of that year, but also a fitting conclusion to his whole life, in the form of a grand summing up of his character as a man, his purpose as a reformer, and his achievement as a thinker.” (Introduction by Tim SC)