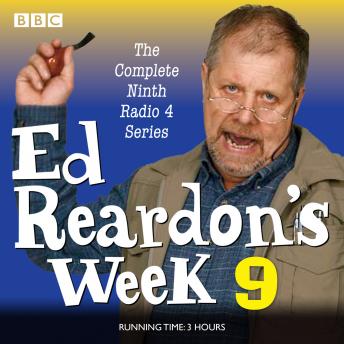 Download or Stream instantly more than 55,000 audiobooks.
Listen to "Ed Reardon's Week: Series 9: Six episodes of the BBC Radio 4 sitcom" on your iOS and Android device.

‘This is not just funny, it’s comic genius’ Radio Times

Ed Reardon, ‘the curmudgeon’s curmudgeon’, leads us through the ups and downs of his week in this ninth series of the award-winning radio sitcom, written by Christopher Douglas and Andrew Nickolds.

In these six episodes, Ed writes a personal statement and applies for a proper job; finds himself becoming the oldest intern in town (and sharing an office with Ping) and pens a script for Jaz Milvain's latest movie. In addition, he enrols in a clinical trial; takes up a professorship at a prestigious writing retreat and shows off his general knowledge in a radio quiz.

As he continues his quest for literary success, Ed must draw on all his talents as a freelancer and freeloader to keep body and soul together (and trusty companion Elgar in 'Value' catfood). But is his luck changing at last?