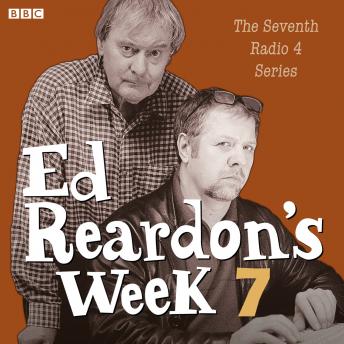 Download or Stream instantly more than 55,000 audiobooks.
Listen to "Ed Reardon's Week The Complete Seventh Series" on your iOS and Android device.

Series 7 of the award-winning BBC Radio 4 comedy starring Christopher Douglas, John Fortune, Stephanie Cole and Sally Hawkins. 'A masterpiece of comedic melancholy' - The Stage. Radio 4's most curmudgeonly author is back for a new series, complete with his trusty companion Elgar, his pipe and his never ending capacity for scrimping and scraping at whatever scraps his agent, Ping, can offer him to keep body, mind and cat together. In these six episodes, austerity has hit Ed hard. But things may be looking up as Ed starts working with the most disturbingly fresh and mesmerizingly compelling voice of his generation, Ben Herbert and finds himself employed on a corporate video along with director and old sparring partner Jaz Milvane. He also enrols on a writing course and learns a thing or two about setting up his very own 'Script Doctor' service. Plus, Ed finds himself in the middle of some sibling rivalry when Ping's sister, Py, undertakes some work experience at the agency; decides to immerse himself in popular culture by retuning away from Radio Four and subscribes to Facebook, where he’s reminded of the lovely Fiona Templeton. Should an old acquaintance be renewed or should Ed leave well enough alone? Written by Christopher Douglas and Andrew Nickolds, this series includes guest appearances by Paul Merton, Geoffrey Palmer and Jenny Agutter. 'Ed Reardon's Week' was voted Best Radio Programme by the Broadcasting Press Guild.