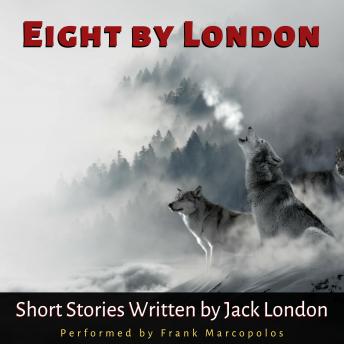 Download or Stream instantly more than 55,000 audiobooks.
Listen to "Eight by London: Short Stories by Jack London" on your iOS and Android device.

Jack London (1876-1916) was an influential American writer, who often chronicled adventures taking place in extremely cold environments. His works were popular in his lifetime, earning him a large fortune.

Frank Marcopolos (1972-) founded 'The Whirligig' literary magazine in 1999, which has been called 'a landmark, demonstrating the power of the literary underground.' One reviewer said that 'you get this true lion-roaring sense that Editor Frank Marcopolos knows what he likes, and how to read, and how to publish, and he has guts, and eats insects on Wheaties with bleach.' Frank's long-form fiction has been reviewed with such praise as 'thorough-goingly entertaining' and 'highly readable...recalls the style of Michael Chabon or John Irving. A literary gem that should not be missed.' A broadcasting-school graduate, Frank's unique literary-audio work has been featured in movie trailers, scholastic environments, underground mixtapes, and on YouTube, with one of his audiobooks achieving over 100,000 'views' there. He lives in Pittsburgh, PA, without a dog, and records at The Bookquarium Recording Studio.

'The vocals on this are fabulous. I loved listening and you will too! Great voice on this guy.' - From a Scribd review