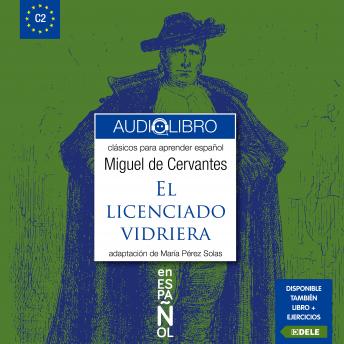 El licenciado Vidriera, published in 1613, is one of twelve stories that compose the Exemplary Novels of Miguel de Cervantes Saavedra
The argument is as follows: two gentlemen find a boy named Tomás Rodaja sleeping on the banks of a river. They take him to Salamanca and pay for his studies in return for him working for them. There he graduates and then travels through Italy and Flanders. When he returns to Spain he goes crazy, because of a love potion that a lady secretly gives him in order to make him fall in love. He thinks he has a glass body and is very fragile and so believes that if he is touched, he will break into a thousand pieces.
From that moment, the lawyer Vidriera says all the truths that no one dares to say.
Cervantes creates in this novel a wonderful personage who resembles Don Quixote in his ingenious madness. Thus, the protagonist believes that it is glass, but it shows a wonderful lucidity and a great humor acting like a madman who says great truths, forbidden to a healthy mind.
The novel seems to be an excuse for Cervantes to write a series of witty ideas and sayings in a more original way than the writers of his time. He revolutionizes this literary genre with his novel by framing all his ideas in the context of the protagonist's madness. In this way, he justifies the audacity with which he judges most of the human behaviors of his time that seem to him unworthy, and can make a satire of the different sectors and social classes and about their way of life.