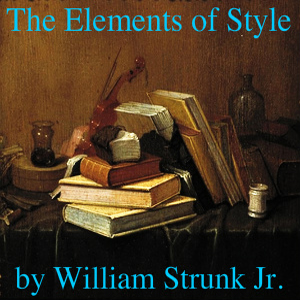 The Elements of Style

Download or Stream instantly more than 55,000 audiobooks.
Listen to "The Elements of Style" on your iOS and Android device.

“The Elements of Style (1918) by William Strunk, Jr. is an American English writing style guide. It is one of the best-known and most influential prescriptive treatment of English grammar and usage, and often is required reading in U.S. high school and university composition classes. The original 1918 edition of The Elements of Style detailed eight elementary rules of usage, ten elementary principles of composition, “a few matters of form”, and a list of commonly "misused" words and expressions. This book, printed as a private edition in 1918 for the use of his students, became a classic on the local campus, known as "the little book", and its successive editions have since sold over ten million copies. This version is based on the public-domain text from 1918, which was originally uploaded to Wikibooks and wikified by Wikibooks:User:Lord Emsworth in 2003. In January 2006, Kernigh transwikied the text from Wikibooks:Elements of Style to Wikisource.” (Summary by Wikipedia and Wikisource)