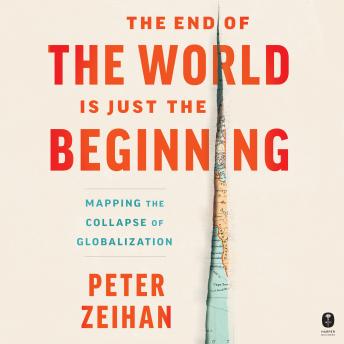 The End of the World is Just the Beginning: Mapping the Collapse of Globalization

Download or Stream instantly more than 55,000 audiobooks.
Listen to "The End of the World is Just the Beginning: Mapping the Collapse of Globalization" on your iOS and Android device.

2019 was the last great year for the world economy.

For generations, everything has been getting faster, better, and cheaper. Finally, we reached the point that almost anything you could ever want could be sent to your home within days - even hours - of when you decided you wanted it.

America made that happen, but now America has lost interest in keeping it going.

Globe-spanning supply chains are only possible with the protection of the U.S. Navy. The American dollar underpins internationalized energy and financial markets. Complex, innovative industries were created to satisfy American consumers. American security policy forced warring nations to lay down their arms. Billions of people have been fed and educated as the American-led trade system spread across the globe.

All of this was artificial. All this was temporary. All this is ending.

In The End of the World is Just the Beginning, author and geopolitical strategist Peter Zeihan maps out the next world: a world where countries or regions will have no choice but to make their own goods, grow their own food, secure their own energy, fight their own battles, and do it all with populations that are both shrinking and aging.

The list of countries that make it all work is smaller than you think. Which means everything about our interconnected world - from how we manufacture products, to how we grow food, to how we keep the lights on, to how we shuttle stuff about, to how we pay for it all - is about to change.

A world ending. A world beginning. Zeihan brings readers along for an illuminating (and a bit terrifying) ride packed with foresight, wit, and his trademark irreverence.