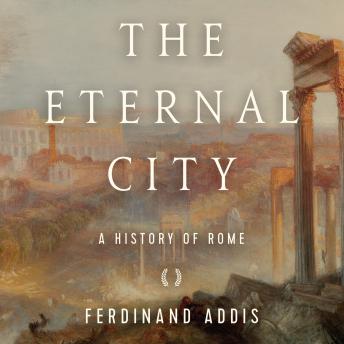 The Eternal City: A History of Rome

Download or Stream instantly more than 55,000 audiobooks.
Listen to "The Eternal City: A History of Rome" on your iOS and Android device.

Why does Rome continue to exert a hold on our imagination? How did the Caput Mundi come to play such a critical role in the development of Western civilization? Ferdinand Addis addresses these questions by tracing the history of the Eternal City told through the dramatic key moments in its history: the mythic founding of Rome in 753 BC, the murder of Caesar in 44 BC, the coronation of Charlemagne in AD 800, the reinvention of the imperial ideal, the painting of the Sistine chapel, the trial of Galileo, Mussolini's March on Rome of 1922, the release of Fellini's La Dolce Vita in 1960, and the Occupy riots of 2011. City of the Seven Hills, spiritual home of Catholic Christianity, city of the artistic imagination, enduring symbol of our common European heritage-Rome has inspired, charmed, and tempted empire-builders, dreamers, writers, and travelers across the twenty-seven centuries of its existence. Ferdinand Addis tells its rich story in a grand narrative style for a new generation of listeners.