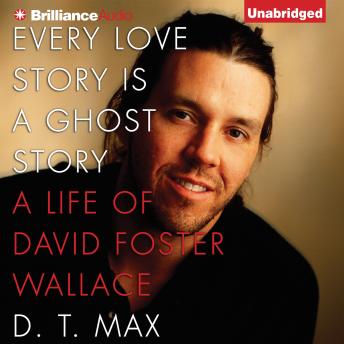 Every Love Story Is a Ghost Story: A Life of David Foster Wallace

Download or Stream instantly more than 55,000 audiobooks.
Listen to "Every Love Story Is a Ghost Story: A Life of David Foster Wallace" on your iOS and Android device.

David Foster Wallace was the leading literary light of his generation, a man who not only captivated readers with his prose but also mesmerized them with his brilliant mind. In this, the first biography of the writer, D. T. Max sets out to chart Wallace’s tormented, anguished, and often triumphant battle to succeed as a novelist as he fights off depression and addiction to emerge with his masterpiece, Infinite Jest.Since his untimely death by suicide at the age of forty-six in 2008, Wallace has become more than the representative writer of his time—he has become a symbol of sincerity and honesty in an inauthentic age. His reputation and reach grow by the day. Max takes us from Wallace’s early years as a child of the 1970s in the Midwest to his hothouse success in his twenties and subsequent collapse into depression and drugs, and from there through his painful reemergence as an apostle of recovery, ending with his triumphant novel of addiction and redemption, the book of the decade, published when he was just thirty-three. But Infinite Jest itself left as an open question what should come next, as Wallace sought hopefully—and then, increasingly, helplessly—for a way forward, stymied even in the midst of the happiest personal time he had ever known.Max guides us on this remarkable literary and spiritual journey, this prolonged exploration of what it means to be human. Wallace was coy with the press and very private, yet the concerns of his writing and the struggles of his life were always closely intertwined. In illuminating the life, Max enriches our understanding of the work. And in his skillful, active investigations into Wallace’s prose, he reveals the author in unexpected ways.In the end, as Max argues, what is most important about Wallace is not just the words he left behind but what he taught us about life, showing that whatever the price, the fight to live meaningfully is always worth the struggle. Written with the cooperation of Wallace family members and friends and with access to hundreds of his unpublished letters, manuscripts, journals, and audio tapes, this deeply researched portrait of an extraordinarily gifted author is as fresh as news, as intimate as a letter from a friend, as painful as a goodbye.