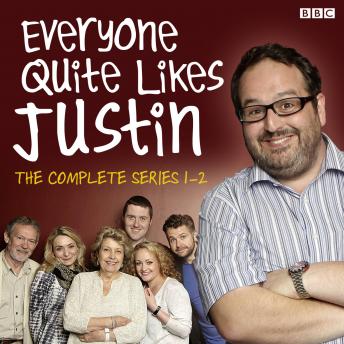 Everyone Quite Likes Justin: The Complete Series 1-2

Download or Stream instantly more than 55,000 audiobooks.
Listen to "Everyone Quite Likes Justin: The Complete Series 1-2" on your iOS and Android device.

In one version of his life, Justin is a well-known local Manchester radio DJ who is successful, funny, and stopped in the street by adoring fans. He's the man who has everything. In another version he's a DJ in a slightly shabby local radio station who gets hassled by the occasional oddball on the street. And he's the man who hopes for everything.

The truth lies somewhere in between.

And at home? Well, naturally, his private life is chaotic. His wife has left him, taking custody of his 8-year-old son Justin jnr, and is in the process of taking him to the cleaners. So he's back on the market. As is his house - so he's currently living in his father-in-law's spare room in Bury. The only person who understands him is his Gran, living in luxury in an old folk's home in Warrington. Oh, and his producer Bryn but this might not be a good thing.

Despite all this mess, Justin always remains positive. Every new day is a new opportunity, 'When life throws you lemons, make lemonade'.

This complete collection of Everyone Quite Likes Justin, Justin is played by Justin Moorhouse, Gran by Anne Reid, Ray by Paul Copley and Lisa by Christine Bottomley.