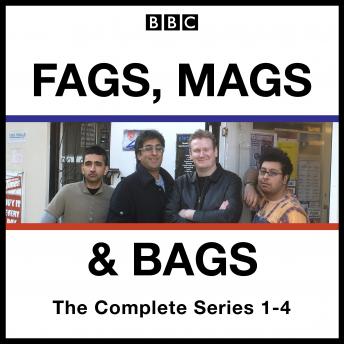 Download or Stream instantly more than 55,000 audiobooks.
Listen to "Fags, Mags and Bags: Series 1-4: The BBC Radio 4 comedy series" on your iOS and Android device.

First broadcast in 2007, Fags, Mags and Bags delivers shop-based shenanigans and over-the-counter philosophy, courtesy of Ramesh Mahju and his trusty sidekick Dave. Ramesh has built his shop up over the course of 30 years, and it is a firmly entrenched feature of the local area. He is ably assisted by Dave, a forty-something underachiever who shares Ramesh's love of the art of shopkeeping, even if he is treated like a slave. Then of course there are Ramesh's sons Sanjay and Alok, both surly and not particularly keen on the old-school approach to shopkeeping. However, they are the natural successors to the business, and Ramesh is keen to pass all his worldly wisdom on to them - whether they like it or not...

Series 1: Raising Keenan, The De-Magowaning of Ramesh, Wall of Crisps, Build the Titanic, The Festival of Maltodextrin, January February.

Series 3: Jack Black's Black Jacks, Mr Majhu Goes To Lenzie, The Wrath of Khan, The Lenzie Splicer, Bacon Punctuation and The Fall of Phallon and the Rise of Bugatox.