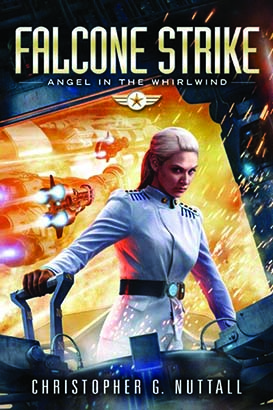 Download or Stream instantly more than 55,000 audiobooks.
Listen to "Falcone Strike" on your iOS and Android device.

Now a celebrated war hero, Captain Kat Falcone is back at the helm of HMS Lightning...and up against near-impossible odds. After an ill-timed outburst almost ends her career, Kat is handed command of a deep-strike mission into enemy space. The objective is to gather intelligence and distract the hostile Theocracy while the Commonwealth prepares its counteroffensive.

The chances for success are slim-and for survival even slimmer.

Armed with a ragtag fleet of outdated starships, a few loyal officers, and a skeleton crew of refugees, Kat knows the Royal Navy expects her to fail. But failure almost certainly means death-or worse, as the Theocracy does not treat prisoners kindly. Pitted against the enemy defenses of her old nemesis Admiral Junayd, there is no room for error. And with a spy hidden aboard her ship, Kat will need more than her wits to survive. Can Kat enter the lion's den, strike a blow for the Commonwealth, and escape with her life?