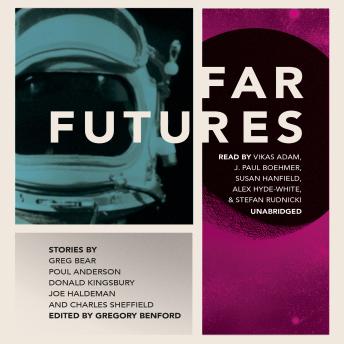 Download or Stream instantly more than 55,000 audiobooks.
Listen to "Far Futures" on your iOS and Android device.

Fivenovellas of hard science fiction by five modern masters of the form
From NebulaAward winner Gregory Benford comes this ambitious hard SF anthology thatcollects five original novellas. Each one takes the very long view-all are setat least ten thousand years in the future. The authors take a rigorouslyscientific view of such grand panoramas, confronting the largest issues ofcosmology, astronomy, evolution, and biology.
The lastmoments of a universe beseiged occupy Greg Bear's Judgment Engine. Can something human matter at the very end ofcreation, as contorted matter ceases to have meaning and time itself stuttersto an eerie halt?
Genesis by Poul Anderson is set a billion years ahead, when humanity has become extinct. Earth is threatened by the slowly warming sun, and vast machine intelligences decide to recreate humans.
DonaldKingsbury contributes Historical Crisis,a starting work on the prediction of the human future that challenges thefoundations of psychohistory, as developed in Isaac Asimov's famous FoundationTrilogy.
JoeHaldeman's For White Hill confrontshumanity with hostile aliens who remorselessly grind down every defense againstthem. A lone artist struggles to find a place in this distant, wondrous future when humanity seems doomed.
In At the Eschaton by Charles Sheffield, aman tries to rescue his dying wife from oblivion by hurling himself forward, inboth space and time, to the very end of the universe itself.