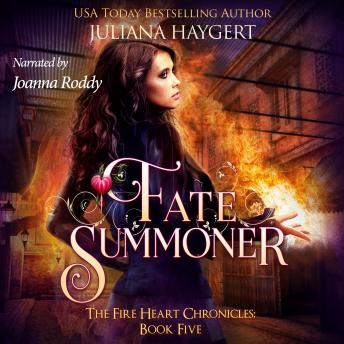 Download or Stream instantly more than 55,000 audiobooks.
Listen to "Fate Summoner" on your iOS and Android device.

“Magic never lies. I’m forced to make a choice. And once I decide, I can never go back.”


Mirella has failed in her duties as Heart Maiden. Distracted by past romances and unable to properly summon her powers, Mirella has left her enclave vulnerable.


Then the worst happens—she slips fully into madness.


Mirella is taken away to a facility where she’ll be held against her will, until the council decides the day of her execution. Even worse, the tziganes have taken her love, Kane, as prisoner.


But Mirella isn’t ready to die. She decides to fight back, to save herself and Kane, and is forced to go on the run. Her actions cause the entire tzigane community to erupt into civil war.


Mirella can’t save her people without a sacrifice—one that can only end in blood.


Fate Summoner is the fifth book in the incredibly stunning Fire Heart Chronicles series. A paranormal romance with just the right amount of action, adventure, and heat, fans of urban fantasy won’t be able to get enough this incredible fantasy world!