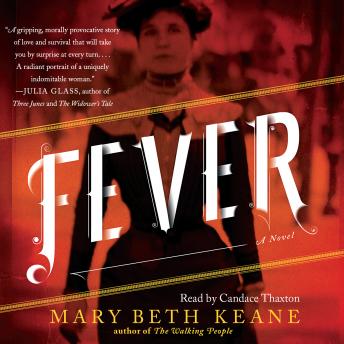 Download or Stream instantly more than 55,000 audiobooks.
Listen to "Fever: A Novel" on your iOS and Android device.

From the bestselling author of Ask Again, Yes, a novel about the woman known as “Typhoid Mary,” who becomes, “in Keane’s assured hands…a sympathetic, complex, and even inspiring character” (O, The Oprah Magazine).

Mary Beth Keane has written a spectacularly bold and intriguing novel about the woman known as “Typhoid Mary,” the first person in America identified as a healthy carrier of Typhoid Fever.

On the eve of the twentieth century, Mary Mallon emigrated from Ireland at age fifteen to make her way in New York City. Brave, headstrong, and dreaming of being a cook, she fought to climb up from the lowest rung of the domestic-service ladder. Canny and enterprising, she worked her way to the kitchen, and discovered in herself the true talent of a chef. Sought after by New York aristocracy, and with an independence rare for a woman of the time, she seemed to have achieved the life she’d aimed for when she arrived in Castle Garden. Then one determined “medical engineer” noticed that she left a trail of disease wherever she cooked, and identified her as an “asymptomatic carrier” of Typhoid Fever. With this seemingly preposterous theory, he made Mallon a hunted woman.

The Department of Health sent Mallon to North Brother Island, where she was kept in isolation from 1907 to 1910, then released under the condition that she never work as a cook again. Yet for Mary—proud of her former status and passionate about cooking—the alternatives were abhorrent. She defied the edict.

Bringing early-twentieth-century New York alive—the neighborhoods, the bars, the park carved out of upper Manhattan, the boat traffic, the mansions and sweatshops and emerging skyscrapers—Fever is an ambitious retelling of a forgotten life. In the imagination of Mary Beth Keane, Mary Mallon becomes a fiercely compelling, dramatic, vexing, sympathetic, uncompromising, and unforgettable heroine.